With the induction of Tennessee Williams (1911 – 1983) into the American Poets’ Corner, the Cathedral weaves one of America’s greatest playwrights into the fabric of the Arts Bay. Though he is primarily known for his plays and the vivid, raw characters into which he breathed life, Tennessee Williams also composed poetry.

Choral Evensong: Poetry of the Divine and the Mystic
Sunday, November 1, 4 pm
Guest homily offered by Roger Housden, author of many books, including For Lovers of God Everywhere: Poems of the Christian Mystics

A special Evensong Service to complete the tribute and unveil the stone inscribed with Mr. Williams’ line, “Time is the longest distance between two places,” from The Glass Menagerie. Poets associated with the Poets’ Corner, including Mr. Martin, and current electors and previous Poets-in-Residence will read from their works and offer tribute to Mr. Williams.

All events are free and open to the public

Posted by Scott Kenan at 3:03 PM No comments:

WALKING ON GLASS: A MEMOIR OF THE LATER DAYS OF TENNESSEE WILLIAMS 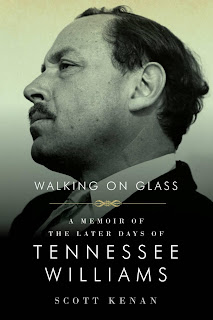 http://www.walkingonglass.net/
Posted by Scott Kenan at 2:53 PM No comments: